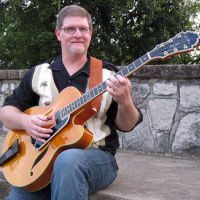 Randy Buckner performs regularly with his Moll guitar. He plays fingerstyle — in the style of Merle Travis and Chet Atkins — as well as jazz and rockabilly. He became a student of the guitar 37 years ago, starting at age 9, and continues to challenge himself as a performer and busy guitar teacher.

He says about his Moll:
The guitar plays itself, I'm not even aware of it when playing, and there is an impressive attention to detail in Bill's workmanship. It has an extremely comfortable neck and a beautifully figured maple back, sides and neck. He goes on to say: I get little or no feedback in a live situation.

At a recent National competition, one of the judges commented that Randy had the best tone of all the contestants.